The Perils of Swarm Technology – Are you ready for a Swarm Attack?

Have you ever imagined your organization’s network getting infiltrated by a bot swarm that eventually steals data and leaves you spellbound? If you haven’t, it is time to beware of such a possibility. Advances in Artificial Intelligence have made intelligence sharing and correlation a possible approach for specialized bots to interact amongst themselves in real-time and improvise an attack in perfect synchronization. We have entered the age of swarm technology and it is only apt to brace ourselves for an impending attack from the new miscreants.

When we talk about swarm technology, we usually refer to the mechanism that drives intelligent and autonomous bots (also called Swarmbots) to collaborate in large swarms. For solving certain problems, we require clusters of devices that can work as a unit. When these Swarmbots are compromised, the problem-solvers turn into potential problem creators that can discover loopholes in the hardware, software, and networks and expose them to disastrous proportions. This is made possible by a process of training the bots to hunt for such vulnerabilities and leverage those, a process infamously known as Machine Learning Poisoning.

What are Swarmbots capable of doing?

Does reading this remind you of specific movie scenes involving bot clusters wreaking systematic havoc? That’s precisely the way we want you to imagine! In real technology, such swarms witness dynamic allocation and reallocation of bots that can be used to orchestrate customized attacks, a few of the features of which are mentioned below:

A popular belief guides us to fight fire with fire. Hence, potential targets of swarm attacks must replicate the collaboration and automation to build the defensive wall of protection. Here are some strategies (nicknamed as SADDD) which can boost the security of your systems and help you evade attacks by Swarmbots:

The pace at which malware evolution is progressing calls for an ever proactive approach to beef up cybersecurity systems across enterprises. As risk mitigation strategies keep getting obsolete, it is highly necessary to digitally transform the overall security strategy for the organization. This shall lend the required flexibility to adapt to any unforeseen threat. Using this approach shall certainly help your organization enhance its threat intelligence and build the defensive wall to keep swarm attacks at bay.

It is just the second month of the new year and we have already been fed with a huge array of developments in the cybersecurity industry. At the same time, the incidents of cyberattacks have been on the rise, continuing to affect organizations and society at large. With this, CF Bytes is back with the latest issue about the major global cybersecurity developments and cyberattacks in the last fortnight.

Safeguarding against E-skimming – The silent troublemaker in online payments

Sticking to the concept of evolution, bad actors on the web have come up with yet another channel to get their work done. This new threat has grabbed eyeballs after affecting global retailers such as Puma, Macy’s, Target and British Airways and helping hackers steal millions of credit card numbers over the past 2 years. Termed E-skimming, this is one of the latest threats to the cyber community, especially when it comes to making online payments. This article aims at throwing some light on it and the ways for the average internet user to safeguard himself/herself.

What is E-skimming all about?

Similar to its offline counterpart (skimming of credit cards at POS terminals), E-skimming, also called Formjacking, is a mechanism by which a hacker inserts special JavaScript code into the retailer’s website. This piece of code copies the information which the user enters and passes it on to the hacker. This information can be very sensitive, with high chances of including critical financial data such as credit/debit card details. This information is then either used by the hacker directly or sold on the dark web.

Ways to safeguard yourself against E-skimming

The above measures can significantly reduce the risk of your joining the already huge list of innocent victims. Stay tuned to our blog for more reads on relevant cybersecurity topics and emerging threats.

A cyberattack is always a piece of bad news for every concerned stakeholder of the victim. Similarly, any new development in cybersecurity needs to reach to every modern-day user, either as a part of an organization or the public in general. In this regard, we bring to you the top 5 cyberattacks and developments in cybersecurity that were observed in the last fortnight in this latest edition of CF Bytes.

Cognitive, motor and emotional abilities make humans the smartest organisms in the world. Otherwise, we would not have witnessed the series of industrial revolutions in our history of technological advancements. But ever since robotics changed the game, humans have increasingly grown dependent on the artificially intelligent machines and used them for innumerable applications. The riveting question is – are these bots fully dependable? If not, what makes them vulnerable, and is there a way to strengthen them?

It is safe to say that automation is the way for modern-day enterprises to move forward, as it makes processes both effective and efficient. Today, robots are counted in millions as far as industrial use is concerned. Hence, it is crucial to understand the most common security vulnerabilities associated with them, some of which have been mentioned below:

The reasons for a robotic system to have vulnerabilities can be many, ranging from faults during production to poor maintenance. However, there are both simple and complex ways by which these risks can be averted. The least that developers should follow is to implement Secure SDLC and properly checked encryption systems while producing the bots. There are some components of building security around a piece of robotic equipment or process. They are:

The best practices of cybersecurity must be observed before, during and after the robot is deployed. This shall create the four key elements attached to building trust within the robotics platform:

As part of maintenance, the software upgrades and patch maintenance procedures must be carefully supervised. Lastly, users should have a response plan ready at all instances to ensure that the recovery time and damages caused in the event of an attack are minimized.

Gone are the days when users of software applications would always rely on text commands or graphical user interfaces (GUIs) to get their jobs done. Instead, we seem to have gone back to older times when errand boys would listen to our instructions and accomplish the tasks on our behalf. That’s right, this is the age of conversational user interfaces and enterprises have rapidly adopted chatbots that continue to benefit the businesses and users alike.

The last fortnight saw a series of events that rattled the world of cybersecurity. Individuals and enterprises have been exposed to several attacks from cybercriminals and have pulled up their socks to upgrade their security and risk management mechanisms. Parallelly, there have been significant developments in this field which further show that there is a huge potential when it comes to making advancements in cybersecurity. This edition of CF Bytes brings to you some of the biggest such instances in this edition which occurred in the aforementioned timeframe. 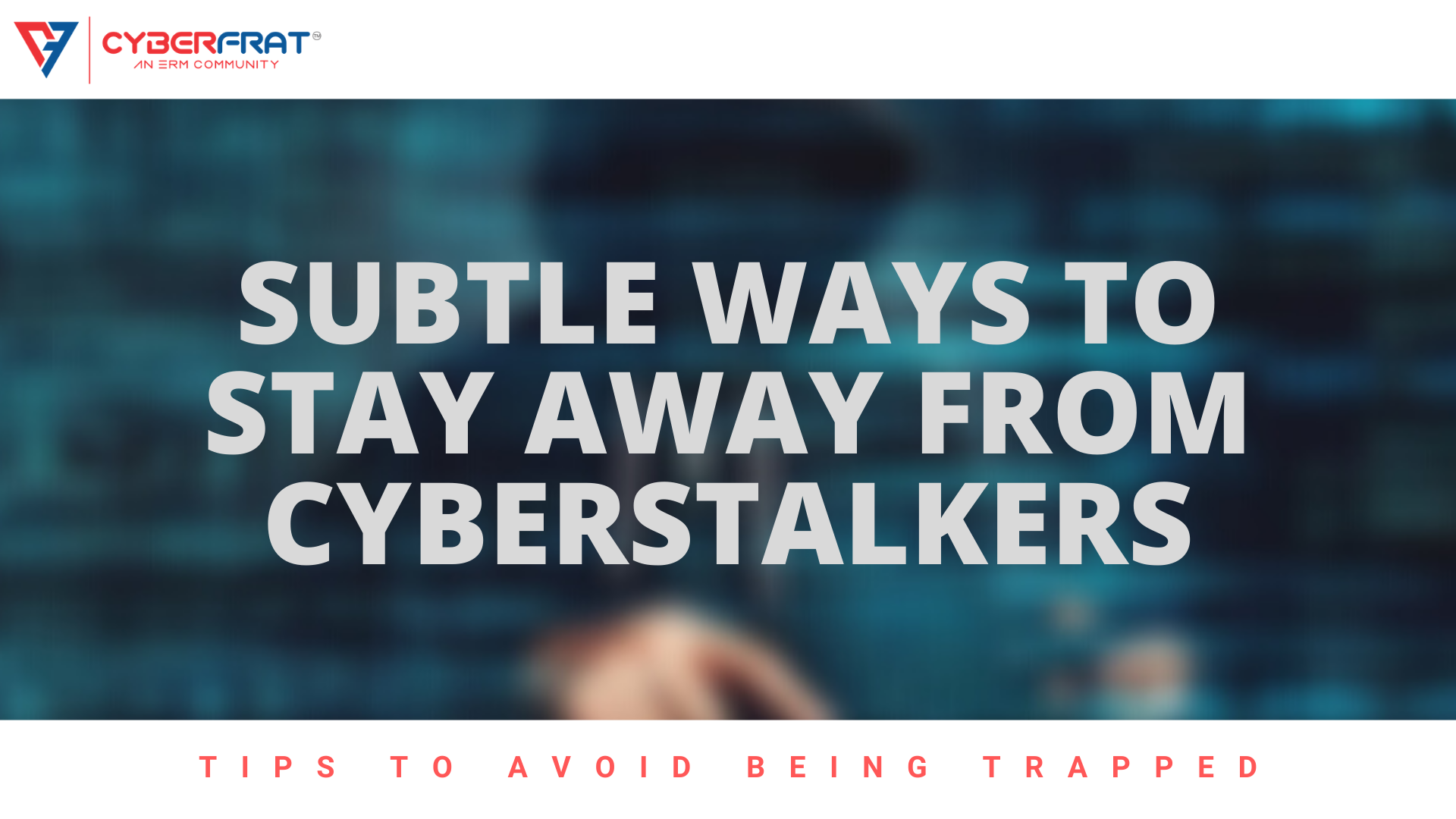 Subtle ways to stay away from Cyberstalkers

Have you ever been bothered by someone on the web? Do you think your company might be at risk due to hideous information robbers? Do you know what Cyberstalking is? Let’s see if we can help you out!

Technology has been one of the main reasons for mankind’s progress for many years now. It has brought us humans closer to one another and made the world a small place, thanks to social networking websites and other platforms for communication. However, troublemakers such as Cyberstalkers never leave an opportunity to act and such activities have gained prominence in recent years. Here, we shall have a look at what is Cyberstalking and how individuals and organizations can avoid being trapped.

What does Cyberstalking mean?

For those who feel it is no different from social media stalking or trolling, it is time to bust the myth and understand the real Cyberstalking meaning. When any individual or organization is harassed online by someone who frequently follows the victim’s online activity and goes a step ahead by gaining access to confidential data and unpleasantly contacting the victim, it is recognized as an act of Cyberstalking. If someone simply follows the social media activity of a specific person frequently, it becomes stalking. Trolling too involves mild harassment of the target but with a humorous touch. The answer to why is Cyberstalking a problem is simple: it is done with malicious intent and has several legal implications too, making it a serious crime, unlike the other two terms.

Cyberstalkers are professional attackers and have many ways to get away from the act by forming fake appearances, thereby staying anonymous. As a result, it becomes difficult to trace them and taking appropriate action. Laws to regulate this act have not been adopted in many countries either. This answers why cyberstalking is dangerous. However, some countries such as the United States have deployed legal measures to register cases of cyberstalking and impose punishments such as fines or imprisonment. In India, cyberstalking is legally recognized by Section 354 D of the Indian Penal Code as an act of spying on someone and creating a sense of fear or alarm. There are other provisions too which protect the victims of online harassment and punish the offenders with rigorous imprisonment.

Identifying Catfishers in the web

A catfisher is someone who creates a fake identity and gains the confidence of the victim to have financial gains or damage the reputation of the victim. Catfishing usually involves copying the profile of an already existing user and thereafter fooling innocent people. This can be identified by performing a Google image search and seeing whether multiple sources exist or not. The social media profile of catfishers often involves a small number of connections. Also, such offenders rarely post pictures with friends or family members and always decline making video calls.

Tips to avoid being trapped

Like many other things in life, cyberstalking is inevitable. The fact that tracing such offenders is difficult makes it all the more unstoppable. However, there are some easy ways by which you can keep yourself or your business relatively safer from the hiding predators. Some of these subtle ways to avoid cyberstalking are:

Life is never easy when a lot of information is likely to be shared online. However, the main idea behind keeping yourself safe from any cyberstalking activity is to refrain from performing any activity that might attract negative attention. In other words, maintaining good digital hygiene is the way forward to keep predators at bay and prevent you or your organization from falling into a trap.