CyberFrat > Blog > Blogs > Subtle ways to stay away from Cyberstalkers

Subtle ways to stay away from Cyberstalkers

Have you ever been bothered by someone on the web? Do you think your company might be at risk due to hideous information robbers? Do you know what Cyberstalking is? Let’s see if we can help you out!

Technology has been one of the main reasons for mankind’s progress for many years now. It has brought us humans closer to one another and made the world a small place, thanks to social networking websites and other platforms for communication. However, troublemakers such as Cyberstalkers never leave an opportunity to act and such activities have gained prominence in recent years. Here, we shall have a look at what is Cyberstalking and how individuals and organizations can avoid being trapped.

What does Cyberstalking mean?

For those who feel it is no different from social media stalking or trolling, it is time to bust the myth and understand the real Cyberstalking meaning. When any individual or organization is harassed online by someone who frequently follows the victim’s online activity and goes a step ahead by gaining access to confidential data and unpleasantly contacting the victim, it is recognized as an act of Cyberstalking. If someone simply follows the social media activity of a specific person frequently, it becomes stalking. Trolling too involves mild harassment of the target but with a humorous touch. The answer to why is Cyberstalking a problem is simple: it is done with malicious intent and has several legal implications too, making it a serious crime, unlike the other two terms.

Cyberstalkers are professional attackers and have many ways to get away from the act by forming fake appearances, thereby staying anonymous. As a result, it becomes difficult to trace them and taking appropriate action. Laws to regulate this act have not been adopted in many countries either. This answers why cyberstalking is dangerous. However, some countries such as the United States have deployed legal measures to register cases of cyberstalking and impose punishments such as fines or imprisonment. In India, cyberstalking is legally recognized by Section 354 D of the Indian Penal Code as an act of spying on someone and creating a sense of fear or alarm. There are other provisions too which protect the victims of online harassment and punish the offenders with rigorous imprisonment.

Identifying Catfishers in the web

A catfisher is someone who creates a fake identity and gains the confidence of the victim to have financial gains or damage the reputation of the victim. Catfishing usually involves copying the profile of an already existing user and thereafter fooling innocent people. This can be identified by performing a Google image search and seeing whether multiple sources exist or not. The social media profile of catfishers often involves a small number of connections. Also, such offenders rarely post pictures with friends or family members and always decline making video calls.

Tips to avoid being trapped

Like many other things in life, cyberstalking is inevitable. The fact that tracing such offenders is difficult makes it all the more unstoppable. However, there are some easy ways by which you can keep yourself or your business relatively safer from the hiding predators. Some of these subtle ways to avoid cyberstalking are:

Life is never easy when a lot of information is likely to be shared online. However, the main idea behind keeping yourself safe from any cyberstalking activity is to refrain from performing any activity that might attract negative attention. In other words, maintaining good digital hygiene is the way forward to keep predators at bay and prevent you or your organization from falling into a trap. 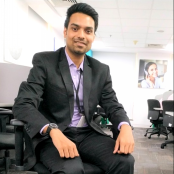 Subham is a technology enthusiast with keen interests in cybersecurity, automation, data analytics, and information systems. A Computer Science engineer and a former web developer, he is currently pursuing his MBA at IIT Kharagpur. His other interests lie in writing and singing.